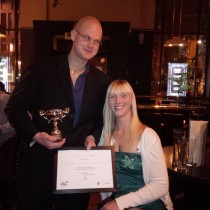 Following on from last year’s success in winning Apprentice of the Year 2014, Robert Hainsworth has won another coveted award when he was presented with Wood Machinist of the Year 2015 by Leeds collage of building.

Robert joined Houghtons as a fresh-faced apprentice in 2013 and has since become an integral part of the Houghton’s team through his dedication to learning and he ability to succeed. Robert successfully completed his Level 3 NVQ in wood machining and currently runs the CNC and beam saw machines with speed and precision.

Robert was surprised when he found out that he was shortlisted for the award and attended the ceremony with his girlfriend Michaela and a very proud mum and dad and directors Nik and Rob at the town hall in Leeds. “Going to the ceremony was a fantastic experience. When they announced the winner, the last thing I expected was to hear my name. I was so shocked; I really wasn’t expecting to win. On his latest achievement Robert said “Without the help and support of the management and the team at Houghtons it would have not been possible for me to achieve so much in such a short space of time. Everyone at Houghtons has dedicated time to support and help me become an integral part of the team”.

Rob Houghton, Managing Director believes that this recent accolade “really highlights the fact that Houghtons dedicates a real commitment to both the quality of its products and the training and development of its team. Robert story is a really great example of how a young person with the drive and commitment to learning can make a real difference to their own and a company’s success. Robert’s story is also a great example of how a young person can go far in the joinery industry and develop their careers. I hope Robert’s story will help to encourage more young people into the industry, which provides so many opportunities for all.”

This article was written by Phil_Wilson